Here’s an ornamental wall fountain on the facade of the Gables Grand condo in downtown Coral Gables. 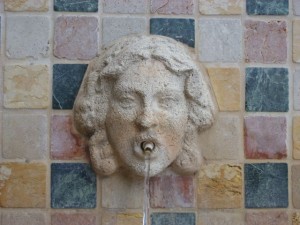 The Gables Grand, 353 Aragon Avenue, occupies the entire block between LeJeune and Salzedo and between Aragon and Giralda.  The fountain is at the corner of Aragon and Salzedo.

posted by // This entry was posted on Friday, April 2nd, 2010 at 9:06 am and is filed under Fountains. You can follow any responses to this entry through the RSS 2.0 feed.