Threats to Luxury Real Estate Values in Miami and Coral Gables: Part I

The value of luxury real estate in Miami and Coral Gables faces severe headwinds in the near future.

Start with the lay of the land: the fundamental metric of months’ supply.  As noted previously, the number of homes for sale versus sold has been well above historically healthy levels.  That problem persists.  For example, there is currently a 28-month supply of homes on the market in Miami-Dade County, according to MLS data (922 homes for sale, 33 sold last month).  The picture is brighter in Coral Gables (16-month supply, 194 homes for sale, 12 sold last month), but still high.  A normal level for the luxury segment is probably about a 10- to 12-month supply (higher than the 6 months’ supply that is normal for the market as a whole, because luxury property sales move more slowly).

These numbers are improved from a year ago, but the market remains in a weakened state.

Now comes a new wave of potential mortgage troubles, and this one aims at the higher end of the real estate market, not the subprime sector.  Charts like the following have made the rounds for the last couple of years.  It shows that the subprime mortgage crisis coincided with the crescendo of rate resets that borrowers faced in 2007-08.  It also shows that a second wave of resets was scheduled to begin in late 2009 and carry into 2012, this time for supposedly higher-quality loans: prime, alt-A (i.e., between prime and subprime) and option ARM (offering flexibility in making payments). 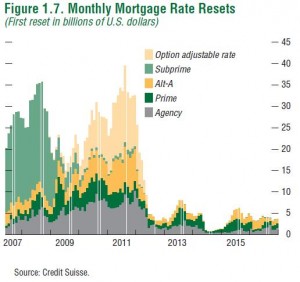 Investment managers like John Hussman have predicted a new round of economic troubles when this next wave of resets hits the real estate market and financial system.  Hussman thinks “we could quickly accumulate hundreds of billions of dollars of loan resets in the coming months, and in that case, would expect to see about 40% of those go delinquent.”

And sure enough, CNBC’s Diana Olick reported yesterday that Moody’s downgraded the credit quality of 201 tranches of residential mortgage-backed securities, composed of prime jumbo loans made by Wells Fargo in 2007-08, and another 134 tranches of the same stuff from 2006.  Moody’s based the downgrade on “rapidly deteriorating performance of these loans.”

Wells Fargo has been very active in lending to buyers of luxury homes in Miami and Coral Gables, so it would come as no shock if the recent downgrade partly reflected loan performance here in South Florida.  We’re not privy to the specific loans populating the downgraded securities, but it would be rather dangerous to assume that luxury real estate in Miami and Coral Gables is immune from broader trends.

posted by // This entry was posted on Tuesday, April 13th, 2010 at 11:25 am and is filed under Real Estate Market Data, Real Estate News. You can follow any responses to this entry through the RSS 2.0 feed.