Ah, tax day.  A fine time to point out another threat to the value of luxury homes in Miami and Coral Gables.

Seems that we got ourselves into quite a pickle by jacking up real estate prices with ever-looser borrowed money until the whole thing collapsed on itself like the Ponzi scheme it was.  So what did we do when our personal willingness and ability to borrow cratered?  We ramped up our public borrowing.  We the People are collectively borrowing to replace our private borrowing.

How did we pay back all that debt?

Same way every time.  By raising tax rates.  Especially at the top.

Here’s a chart of the top tax rate since the federal income tax was adopted in 1913: 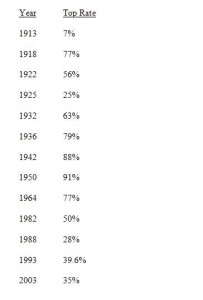 Low at first, rates rocketed higher to pay for WW I.  They plummeted in the 1920s (arguably producing the speculative bubble in real estate and stocks that led to the ’29 crash and Great Depression), and shot higher again to pay for the borrowing and spending that was used to fight the depression, and then higher still to pay for WW II.  Back down they went over the next several decades, arguably contributing to the greatest stock and real estate bubbles in human history.  Now the nation is living off public debt again.  As night follows day, taxes will rise.

How much?  Just to get the federal deficit to 3% of GDP — a mere few hundred billion a year , where it was under President Bush, rather than the $1.5 trillion it is now — will absolutely require significant tax increases.  According to a recent article by Diane Lim Rogers, Chief Economist with the Concord Coalition, an across-the-board, proportional hike in everyone’s marginal rates to reach the 3% deficit target would produce a top rate of 48%.  If only the top two brackets were hiked, they would go to 77% and 72%.

Ever feel like somebody has their eyes on you? 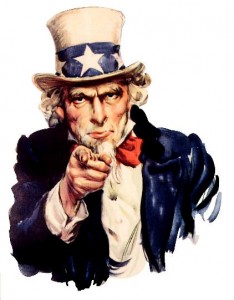 How does all this affect the value of luxury real estate in Miami and Coral Gables?  A cock-eyed optimist might say that people will pile into real estate for the sake of the deductions.  But you can’t deduct the interest on loan principal over $1 million, so the benefit is limited.  (Check IRS Pub. 936 for the rule applicable to your personal situation; for example, the limit is $500,000 if married filing separately.)

posted by // This entry was posted on Thursday, April 15th, 2010 at 9:00 pm and is filed under Financial Responsibility, Real Estate Market Data, Real Estate News. You can follow any responses to this entry through the RSS 2.0 feed.