posted on May 30th, 2010 filed under: Real Estate Market Data 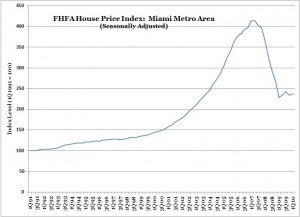 The sudden sideways pattern is rather unnatural, and may reflect the onslaught of government intervention that became the fashion in spring 2009:  $8,000 homebuyer tax credits, suspension of mark-to-market accounting rules, Federal Reserve purchases of securitized mortgages and 10-year Treasury bills,  foreclosure prevention programs — the list goes on and on.

But if price declines nationwide are re-accelerating as the government handouts and assistance programs wane, will real estate in Miami and Coral Gables really manage to avoid the same fate?  The world remains tormented by deflationary debt destruction, and the government may be out of bullets.  Potential buyers might be reminded of the old Clint Eastwood line:  “You’ve got to ask yourself a question.  Do I feel lucky?”

Buying real estate in Miami or Coral Gables remains a risky proposition.  Make sure you work with a broker who will act in your best interests, explain the pros and cons, and preferably rebate you a big chunk of change.  Hmmm, wonder who that might be . . . .

posted by // This entry was posted on Sunday, May 30th, 2010 at 11:28 pm and is filed under Real Estate Market Data. You can follow any responses to this entry through the RSS 2.0 feed.