In April, the city commission in Coral Gables approved the city’s purchase of an empty lot at 4650 Alhambra Circle, to be used as a park.  The lot is two blocks north of Blue Road, on the west side of Alhambra. 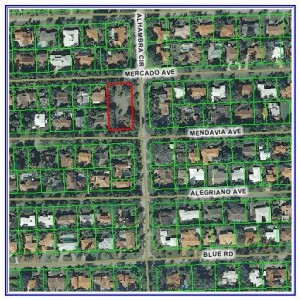 Does anybody think property values have risen since 2005?

The city, however, found its own appraisers to justify the million-dollar price tag.

Appraisal #1 was based on “comparable” sales on Valencia Avenue (prime real estate near the Biltmore Hotel and Venetian Pool), and on Tigertail Avenue, far away in north Coconut Grove:

Appraisal #3 was based on sales including the one on Valencia, one in Coconut Grove and one on School House Road in the estate area known as Ponce/Davis.  Oh, and a fourth one that wasn’t a sale but a listing — a property that sold in 2003 for $650,000 but which the appraiser estimated at about $1.1 million after discounting from the asking price of $1.395 million.  (That property apparently never sold.)

But of course, none of this really matters, because Coral Gables wasn’t spending its own money anyway.  This bailout was courtesy of county taxpayers. 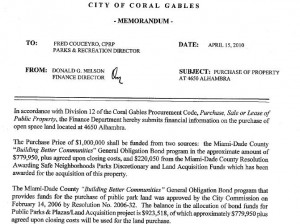 As everybody knows, Miami-Dade County has plenty of money to throw around for things like parks in Coral Gables.

The biggest shame is that the would-be developer’s dreams were never realized.  After obtaining approval to split the lot in two, the project never materialized.

Thank heavens the good taxpayers of Miami-Dade County were kind enough to make this poor developer more or less whole.  We can’t have people failing at the things they try to do.  Then nobody would ever try to do anything.

posted by // This entry was posted on Sunday, June 13th, 2010 at 11:56 pm and is filed under Properties in Focus, Real Estate News. You can follow any responses to this entry through the RSS 2.0 feed.