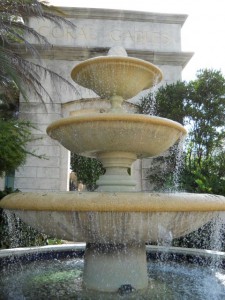 The federal government’s $8,000 homebuyer handout created a wave of sales.  But for every wave, there’s a trough.  What goes up must come down, eh?

The National Association of Realtors reported that sales of existing homes hit a new low for this downturn.  The evaporation of sales activity is a predictable result of the $8,000 government handout for homebuyers that is in the process of expiring.  Contracts were to be signed by April 30 and closings were to occur by June 30.  The latter deadline was extended to September 30, but there probably aren’t many handout-generated deals left in the pipeline at this point. 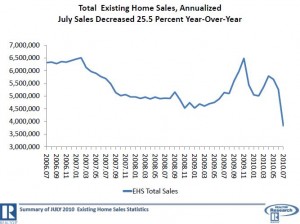 New-home sales appear set to plumb new depths as well.  These sales are registered at the time of contract signings, not closings, so they tend to peak in the spring or early summer so people can close and move during the summer.  With July’s numbers just a smidge above the absolute low for the downturn, new lows will likely be plumbed over the coming months.  Could see a number in the teens before it’s over. 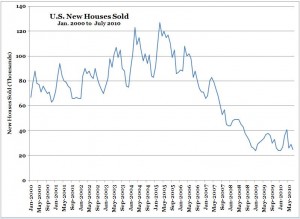 Here’s the full data series going back to the beginning of record-keeping in 1963. 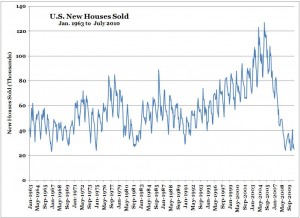 Real estate in Miami and Coral Gables has generally followed the national pattern, and indeed the Florida Association of Realtors reports that there were 593 single-family home sales in the Miami metro area in July, down from a handout-goosed 727 in May.  But 593 is still more than double the measly 244 house sales at the cycle low for Miami in February 2009.  So the Miami and Coral Gables markets may be holding up a bit better than the nation as a whole during this post-handout trough.

Lately, it’s been all about the vice versa.  The 10-year yield has collapsed on renewed fears of economic weakness, deflation, and impotence trumping stimulus.  The yield is now back to where it was in spring 2009 when the stock market bottomed amid widespread despair. 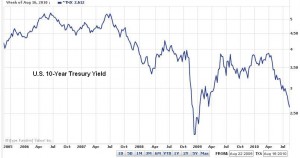 That’s good news if you want a mortgage to buy a home in Miami or Coral Gables, because the rate on a 30-year conventional mortgage is hitting its own new lows in the 4.5% range.  Of course, the question is whether home prices in Miami and Coral Gables will fall further if the bond market is right about the severity of renewed economic weakness.  It doesn’t make sense to buy a depreciating asset with borrowed money, no matter how cheap the financing. 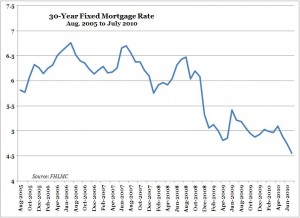 Fountain in the plaza of the Shops at Midtown Miami.  (Romero Britto sculptures like the one in the background are ubiquitous in Miami.) 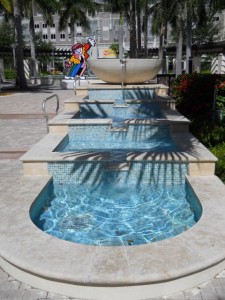 posted on August 20th, 2010 filed under: Properties in Focus

A steady supply of buyers is supporting the real estate market in the Golden Triangle neighborhood of Coral Gables, near the Biltmore Hotel.  Recent sales illustrate the reasonably firm demand for older homes with character. 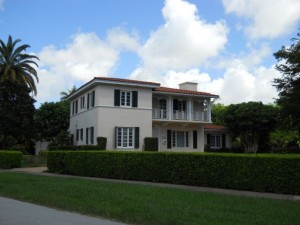 The home at 923 Escobar Avenue sold for $930,000.  The previous sale was in 2007 for $769,500.  According to the sales pitch, a whole lot of money was spent on improvements, so the seller did not exactly perform a miracle by making a big profit in a down market.  But at $347 per square foot, the buyer paid a handsome price. 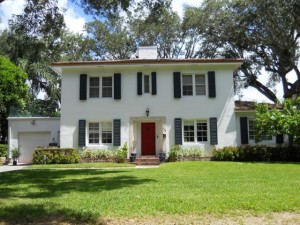 Two other homes in the Golden Triangle area of Coral Gables were listed recently and quickly disappeared from the market.  You can assume they are under contract.

The property at 1115 Anastasia Avenue, across from the entrance to the Gables Stage theater at the Biltmore Hotel complex, was advertised for just under $1 million.  It has 5 bedrooms and 3 baths, if you count the little maid’s quarters by the garage.  Lots of character inside, but lots of termite damage too.  The seller reportedly got a cash offer reasonably close to full price, from a buyer with peculiar reasons for wanting to be as close to the Biltmore as possible.

Another sale that seems to be in the works is at 3717 Toledo Street.  For this run-down, older house with character, the sellers were reportedly seeking at least $850,000.  Interest seemed strong, and they probably got at least that much, despite the need for a couple hundred thousand dollars’ worth of renovations. 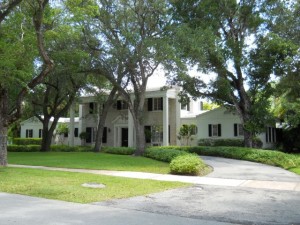 Granted, these old Coral Gables homes probably would have sold for more a few years ago at the height of the real estate bubble.  But today’s buyers are hardly getting bargains.  These are not elite luxury homes.  Residents in the area are typically white-collar workers and retirees, not international jet-setters.  Paying $900,000 for a home implies about $90,000 a year in ownership costs — maybe $80,000 at today’s low mortgage rates.  Not cheap.

The Standard & Poor’s Case-Shiller Home Price Index registered its first monthly advance in over half a year for the Miami metro area that includes Coral Gables.  After drifting lower for a while, the index for the three-month period ending May 2010 ticked up, recovering a few months of the gradual slide in real estate prices. 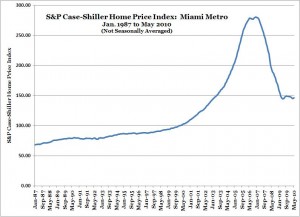 The S&P Case- Shiller Home Price Index is also segmented into price tiers.  At first blush, the high-tier segment would seem to be much more relevant to real estate values in Coral Gables and other luxury-home submarkets in Miami.  But the threshold for the high tier in Miami, as the S&P Case-Shiller Index defines it, is only $257,319.  As a result, the overall pattern is pretty much the same, with the scale of the boom and bust somewhat more attenuated — perhaps because mortgage fraud and the Wall Street mortgage-securitization scheme had the biggest impact at the lower end where the only way to buy is to borrow. 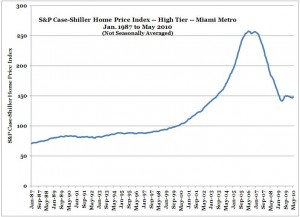 The same patterns are on display in the S&P Case-Shiller Home Price Index for the New York metro area. 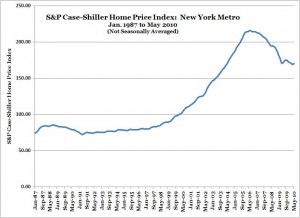 Again, the high-tier index takes the same general shape, with the amplitude of the boom and bust a bit more moderate than for the overall index.  The high tier in New York is defined as above $433,673. 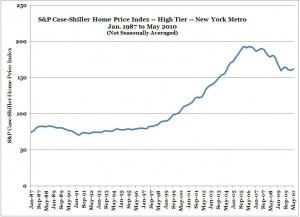 Fountain at Biltmore Hotel and Golf Course in Coral Gables. 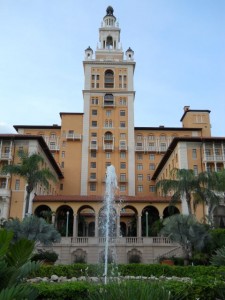