Cash Is King in Miami and Coral Gables Real Estate

Looking to buy a house in Miami or Coral Gables?  Great!  How much will you need as a downpayment?  Why, 100%, of course!

All-cash deals have become a stupefying 60% of all single-family home sales in the Miami and Coral Gables area. 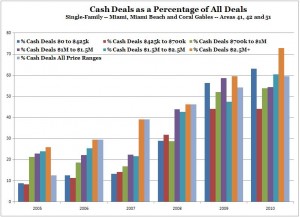 For luxury homes selling for more than $2.5 million in Miami and Coral Gables, the share of cash deals has reached 72.8%.  But you expect a high proportion of cash deals (o.k., not that high) from people who are truly wealthy.

The really amazing numbers are in the price ranges where you know people ordinarily borrow to buy.  For 63% of deals below $425k to be cash, or 53.9% of deals between $700k and $1 million to be cash, is flabbergasting.  Who knew everybody had so much cash lying around?

Are investors replacing failed would-be homeowners and suddenly deciding to become landlords in Miami and Coral Gables?  Or did this many people see it all coming, sell their houses near the peak and rent for a couple of years, so they can come back in now with cash?  A recent post showed how rentals rose dramatically and appear to have peaked.  But it’s hard to believe that so many people timed it all so well.  We’re talking 60% of sales.

Whatever the explanation, what happens next?  As economist Herbert Stein famously said: “If something cannot go on forever, it will stop.”

As the cash buyers fade, what happens next?

posted by // This entry was posted on Tuesday, September 28th, 2010 at 12:51 pm and is filed under Financial Responsibility, Real Estate Market Data. You can follow any responses to this entry through the RSS 2.0 feed.