The Standards and Poor’s Case-Shiller Home Price Index for the Miami metro area (which includes Coral Gables) has declined for three straight months and hit a fresh new low for the real estate collapse.  For the three months ending October 2010, the index level has fallen below its previous low of May 2009.

From a short-term perspective, the new low looks fairly significant. 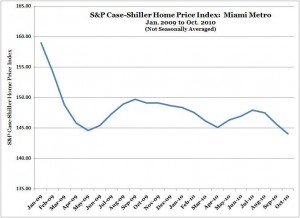 But in the big picture, the new low is just a wiggle. 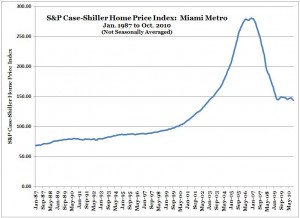 Time will tell whether this the start start of a new leg down for the market.

posted by // This entry was posted on Sunday, January 2nd, 2011 at 9:04 pm and is filed under Real Estate Market Data. You can follow any responses to this entry through the RSS 2.0 feed.