A fair measure of the appetite for mortgage debt is the total amount of home mortgage debt outstanding.  True to form, this metric has told — indeed foretold — the story of the current real estate implosion.  When the wild expansion of home mortgage debt crested, it was time to sell, especially in the areas where lending had become the most detached from reality.  Real estate in Miami and Coral Gables fit that description, and prices followed the numbers for total debt, heading down. 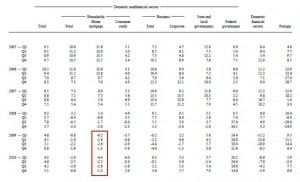 Unlike other real estate downturns, the present implosion has seen the appetite for debt not just recede to a lower level but turn negative.  This reflects both a drawdown in new borrowing as interest in home ownership wanes, and the destruction of existing debt as bad loans are written off.  Quite a deadly combination.

Do not expect real estate values to resume their long-term upward trajectory as long as home mortgage debt is being destroyed.

posted by // This entry was posted on Saturday, March 19th, 2011 at 8:26 am and is filed under Financial Responsibility, Real Estate Market Data. You can follow any responses to this entry through the RSS 2.0 feed.