The price per square foot of large homes in Coral Gables exhibits a rise and fall like the rest of the Miami market. 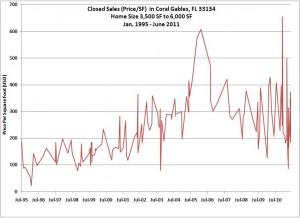 During the bubble, prices went ballistic, but sales dried up — one of the classic signs of a top in the real estate market.  Now that prices have receded to a range in line with the 2002-2004 period, sales have come back.

When the bubble began in about 2000, the norm of annual mid-single-digit price increases gave way to the mania of annual price increases ranging from 15% to 25%.  The 2002-2004 price range was excessive at the time, but with nearly a decade to work off that excess, the same prices may be defensible here in 2011.  In other words, trendline single-digit appreciation has more or less caught up with the boom-and-bust trajectory of Coral Gables home prices.  Of course, mean-reverting asset prices sometimes overshoot to the downside, so there’s no guarantee against further declines.

Displaying the sales in a one-by-one series rather than by date makes it easier to see the trajectory of prices in times of increased sales activity, like the recent post-bubble period.

posted by // This entry was posted on Friday, July 29th, 2011 at 10:31 am and is filed under Real Estate Market Data. You can follow any responses to this entry through the RSS 2.0 feed.