According to the S&P Case-Shiller Home Price Index, prices in Miami have been in a narrow, flat channel for about one year now.  A similar pattern held from 2009-2010 before slipping to the current level. 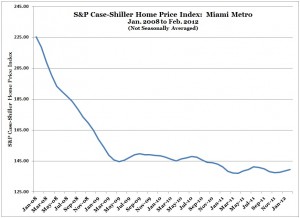 When looking at a long-term chart, it’s tempting to draw a straight line and say prices remain above the trendline: 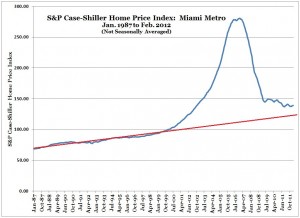 On the other hand, a trendline accurately adjusted for the effect of compounding would curve gradually upward.  If the Case-Shiller index had continued rising at its 1987-2000 rate of 2.95% instead of booming and busting, its current value would be about 142.50.  In that sense, prices have already overshot to the downside by a few percent.