The latest reading of the Case-Shiller Home Price Index for the Miami metro area scored a seventh consecutive monthly gain, sparking optimism that housing prices in Miami may have finally hit bottom.

The trend is indeed impressively longer than in other short periods of improvement since the crash, although prices have not clearly escaped the sideways channel established several years ago when property values began to bounce along a bottom. 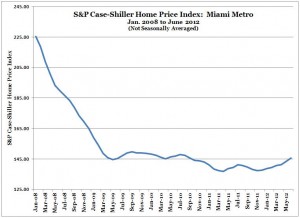 The latest improvement looks fairly promising, though still inconclusive, on the long-term chart as well.

Is the 7-month string of gains in the Case-Shiller index proof that housing has bottomed?  Or is it just an artifact of the latest round of Federal Reserve interest-rate manipulation?  The question is important, because the Federal Reserve’s low-rate policy in the early 2000s played a big part in creating the housing bubble, and those who bought in that low-rate, rising-price environment came to regret it.  When the Fed raised rates, the jig was up.  As Warren Buffett likes to say, when the tide goes out, you find out who’s been swimming naked.

So it’s worth reading optimistic news reports with a jaded eye.  For example, the Miami Herald yesterday reported:

[I]f South Florida home values continue rising at their current pace, it will be 2017 before they return to peaks hit in 2006, according to the latest results from the Case-Shiller real estate index.

This is a dangerous assumption based on a flawed analysis.  As the same article points out, prices are still down 47% from their high.  To recover that loss in 5 years would require greater than 8% compounded annual gains.  That’s a much greater rate of appreciation than prevailed before the bubble, so the Herald article is basically talking about a new bubble — an echo bubble.  That’s hard to imagine.  Will banks abandon lending standards again?  Will incomes rise furiously?  Will interest rates fall much further, considering that the Fed is already “all in” since announcing “QE infinity”?

It’s not even clear where the Herald gets the idea that the “current pace” of gains is greater than 8% annually.  Year-over-year, from June 2011 to June 2012, the Case-Shiller index gained 4.4%.  At that rate, it would take another 9 years to get back to the old high.  And that assumes the recent trend is sustained for 9 years.  Perhaps the Herald chose some shorter, sharper period of recent gains (e.g., month to month) and projected that into the future.  That is an unreliable methodology.

On September 4, 2008, even before the fall of Lehman Brothers, the advice here was that “prices in Miami will fall 30% to 50% over a period of three to four years, and not return to their old highs until more than a decade has passed.”  House Price Index Update — New York and Miami (Sept. 4, 2008).  Looks like it will indeed take more than a decade to get back to the old highs.

If you find a good opportunity and you plan on living in a home for a long time, then buying may make sense for you.  Just beware irrational exuberance.