So You Wanna Be a Landlord?

Investors big and small have suddenly decided that it’s a great idea to buy single-family homes for rental income and future price appreciation, according to a flood of media reports.  A quip about how quickly we forget would be too easy.  And indeed, these investors are far more responsible than the yahoos who bought homes during the bubble.  Those were bad investors, and these are good ones.  Right?

Renting a house is hardly a newfangled way to earn income.  This big new idea is actually an old idea that previously had limited appeal.  What changed?  For one thing, the government rolled out big subsidies for institutional investors.  For another, Federal Reserve policies are starving small investors of a fair yield on their bank deposits, forcing people to hunt for yield in places they never considered before.

Such things tend to end poorly, but in case that observation strikes you as unconvincing and platitudinous, let’s look at a few recent sales to see what they say about how profitable buying and renting single-family homes really is.

The math is not hard.  In the simplest sense, your yield equals rent, minus carrying costs, divided by purchase price.  This is also known as your capitalization rate, or cap rate.

The major carrying costs annually are property taxes, homeowner’s insurance, and maintenance.  In the Miami area, property taxes approach 2% of the purchase price, homeowner’s insurance can be about 1% to 2% of the purchase price depending on the age and structural characteristics of the home, and maintenance should be budgeted at or near 1% as a rule of thumb anywhere.

If you finance, then the interest is a carrying cost but the out-of-pocket purchase price is effectively reduced by the amount you borrow.  We’ll ignore financing, as it’s often a wash.

So what does this simplified analysis say about buying homes for rental income in the Miami and Coral Gables real estate markets these days?  Consider several homes that recently sold and were also recently rented or offered for rent. 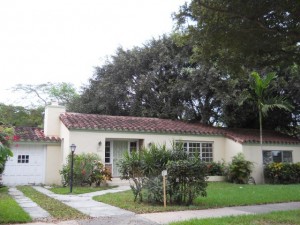 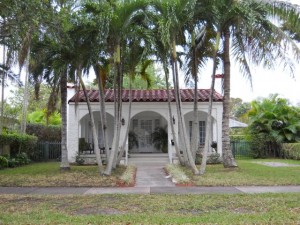 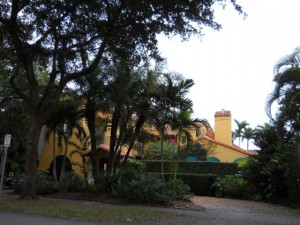 The higher-end home seemingly fared better than the others, but still yields just 3.6% — and that’s based on the asking rent.  It didn’t actually rent for that much, so the yield might well have been less than 3.6% if a tenant had been found.

Which raises another consideration: An important factor omitted from these case studies is the vacancy rate.  There’s a big difference between listing a home for rent and renting the home.  Until it’s rented, your income is not just zero, but negative, because you still owe all the carrying costs.  Professional landlords accordingly reduce their anticipated income by the share of time they think a property will be vacant in between tenants.  A safe margin would probably be at least 5% to 10% for single-family homes, and as 5309 Alhambra Circle shows, it can drag on for much longer.  How long would you be able to take that heat before either cashing out or renting your home on the cheap to seven fraternity brothers and a four-legged mascot?

The home at 5309 Alhambra is particularly interesting because the seller bought it in December 2011 for $1,215,000, then listed it in March 2012 for sale or for rent.  The list price for sale was $1,397,000.  The list price for rent was $8,200.  It looks like a failed flip that neither yielded a capital gain (remember the brokers probably took 6%) nor successfully rented even after the asking rent was substantially reduced.

Still wanna be a landlord?

posted by // This entry was posted on Thursday, February 28th, 2013 at 9:56 pm and is filed under Financial Responsibility, Properties in Focus, Real Estate Market Data. You can follow any responses to this entry through the RSS 2.0 feed.