Home Construction on the Slow Road to Recovery

It told you there was a boom, it warned you of the bust, and now it’s telling you that this is one slooooow recovery. 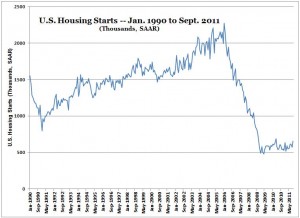 The little uptick in the data for September 2011 is as much dark cloud as silver lining.  All of the gain came from construction of multifamily (5 or more units) buildings.  Nevertheless, the data set overall appears to show a durable bottom in place.

Another positive note is that the NAHB/Wells Fargo Housing Market Index (commonly known as the homebuilder sentiment index) jumped to 18 from 14.  Like housing starts data, HMI told you there was a boom and warned you of the bust.  A reading of 18 is still quite negative (below 50 is considered pessimistic), but it’s a significant step back from the edge.  The low back in spring 2009 was in the single digits.

Slowly better is better than worse.

Miami Has Seasons Too

The seasons are subtler variations in Miami than up north, but they are real.  Seems like someone flipped a switch and officially ended summer on October 15.  In the first 15 days of October, there were only 2 days below 85 F.  Since the 15th, we haven’t seen that mark again.  Nighttime lows in the cool 60s underlined the point.  But after two rainy weekends, the sunny skies and tepid temps were like a blank canvas for the art of outdoor fun.

All of which set the mood for events that seemed in tune with the approach of winter — otherwise known as high season — when snowbirds migrate just to remain in shirt sleeves and only the vacationers think of wearing a bathing suit at the beach.  Miami and Coral Gables assume an air of sporty sophistication rather than summer sultriness.

The weekend’s opening of the Coral Gables Museum was celebrated by those who helped make it possible.  And the Wynwood art fair celebrated those who make just about anything. 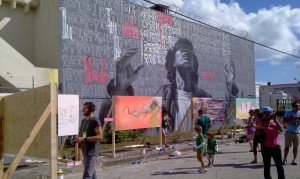 Attendees were encouraged to make their mark. 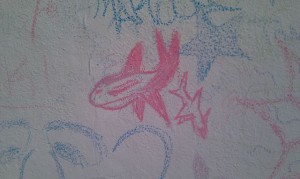 Other harbingers of winter include the DWNTWN Miami concert series, which kicked off October 14. 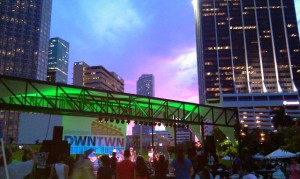 Dates for the rest of the DWNTWN series: November 11, December 9, January 13, February 10 and April 13.  Performers TBA.

High season and high culture are synonomous, and the events become increasingly haute as the temperature becomes increasingly bas.  Miami Beach brings another installment of Sleepless Night on November 5, followed by Art Basel on December 1-4.  If you haven’t got your day cravats out of storage by then, you’ll never amount to anything.

The vast oversupply of homes for sale in Coral Gables has almost been worked off, even in the luxury segment of the market.  340 homes are currently for sale, and 40 sold last month, which works out to 8.5 months of supply.  This is a fundamental barometer for the real estate market.  Six to eight months’ supply is generally regarded as indicating a roughly equal balance of power between buyers and sellers.

Sales of luxury homes in Coral Gables continue to shows signs of life.  It’s normal for higher-priced homes to sell more slowly, but for a while, they were hardly selling at all. 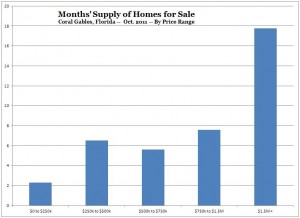 Real estate in Miami and Coral Gables remains vulnerable to further price declines on several measures: historical valuations, the price-to-income ratio, and the cost of owning versus renting.  But those measures are decreasingly troublesome, and combined with the normalization of the months’ supply measure, suggest dissipating risk for buyers. 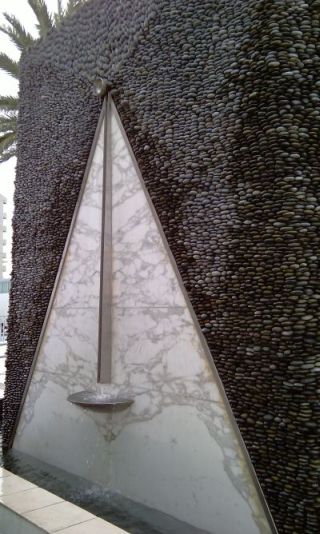 According to the FHFA House Price Index, real estate prices are still falling in Miami and New York.

Keep your eye on the long-term trend line, which we warned long ago was our destiny.  At the time, that implied a potential 50% price decline for home values in Miami.  (Did any other real estate broker warn you about that?)

Home prices in New York have even further to go.  The New York real estate market remains one of the most overpriced in the country relative to income. 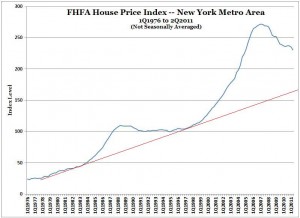 At some point, property prices in Miami and New York could start moving sideways rather than down, and work off the remaining overvaluation as a function of time rather than price.  On the other hand, it’s also possible that prices overshoot to the downside — i.e., go below the long-term trend line before floating back up to it.  In any event, you should assume that the long-term trend is our ultimate destination.

Note: FHFA stands for the Federal Housing Finance Agency, which oversees Fannie Mae and Freddie Mac, the government-sponsored entities that buy up most of the mortgages issued in the United States.  The FHFA House Price Index tracks repeat sales or refinancings of the same properties over time.

Santa Maria Street is one of Coral Gables most desirable addresses.  The street runs up the middle of Riviera Country Club, and houses on both sides have golf course views.  Numerous historic homes and a canopy of old oak trees make Santa Maria and the surrounding neighborhood one of the most picturesque places to live in Coral Gables.

The grand home at 4415 Santa Maria changed hands at $3.5 million, or $607/sf.  It appears to have been a private sale, because the property was not really listed on the MLS (although the sale has been reported there).  Last sale was in October 2003 for $2.875 million. 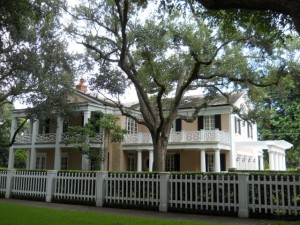 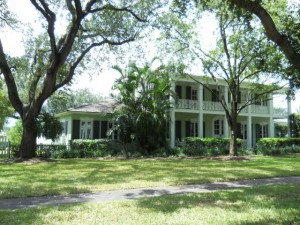 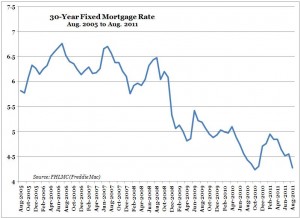 Whether you’re getting a good deal on a home in Coral Gables, Miami or Miami Beach depends on a lot of other factors (including the quality of advice you get from a real estate agent).  But one thing you can’t complain about is the rate you’re going to pay on your mortgage.

posted by // Comments Off on Mortgage Rates Testing 2010 Low 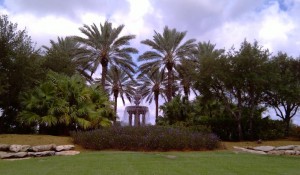 Months’ Supply of Homes Continues to Decline in Coral Gables

The months’ supply of homes for sale in Coral Gables, Florida has continued to decline toward relatively normal levels.  Excess inventory from the real estate bubble has been completely or nearly worked off in most price ranges. 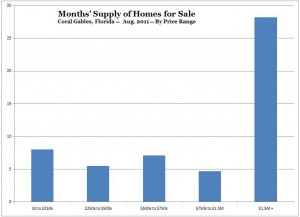 The aggregate months’ supply number of 8.3 is still a bit on the high side, but low enough to represent a roughly even balance between buyers and sellers.

The luxury-home segment in Coral Gables continues to be extremely oversupplied, although there was a spate of closings in July, which makes the current 28.2 months’ supply look good by recent comparison, if still historically bad.  As the chart below illustrates, there is no clear trend toward year-over-year improvement in luxury home sales. 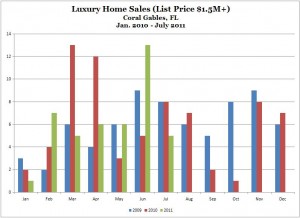 Fountain at the Cosmopolitan condo in South Beach: 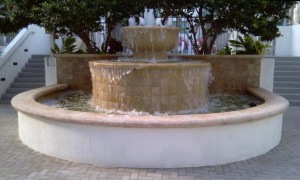